The Mom I Knew

My mother Velma was complex and our relationship was complicated. Like many women of her generation, she took a job during World War II. As a chemistry major in college, she worked in a plant  that developed therapeutic uses for penicillin. She had to give it up when the war ended. She continued in college and met my father Russell after he returned from duty in the Navy. They married and she finished school at the same time she was caring for my oldest brother as a newborn.

As a child growing up, Mom was the driving force in our lives. My father, having been on the road for many years as a traveling textbook salesman, settled in the background in a supporting role, taking charge mostly when travel, our Canadian cottage, or cars, repairs or logistics were involved.

Mom always had papers moving around. When I was a small child, she was writing her Master’s thesis, although I didn’t know it at the time. To me she was just spending a lot of time at the typewriter. As I grew up, she was typing letters to the editor, political com 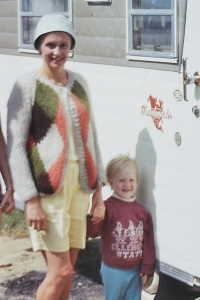 mentaries, letters to friends and seemingly always working on editing a paper for one of my brothers and later, me. Or campaigning for some issue of justice she felt needed to be addressed. She clipped newspaper and magazine articles and saved them for discussion among the family.

Mom held strong opinions on issues of justice and injustice. We belonged to three different  churches over the course of my life, because my mother took issue with either an action of the church (treating a woman minister unfairly in the Methodist Church) or a political position (our Lutheran church supporting a war my mother felt was wrong.) They settled on a UCC church that my parents remained active in until my father died, and which committed no political or administrative transgressions warranting its removal from their religious lives. Although she came from a Republican family, she was a Democrat her whole adult life.

At times, my mom seemed to have a level of frustration with the limitations of her primary role as housewife and mother. She spent time as a substitute teacher and worked with homebound students, but never took a full time job. I wonder if she felt like she was never allowed to develop her full career potential. She was extremely bright. Even though she had the mind of a scholar, she put her heart into being an involved and active mother. And her heart was as strong as her mind.

My mom was an excellent cook. Growing up on a chicken farm, she made the best fried chicken ever. Her pie crusts were perfect and in Canada at our cottage, she could 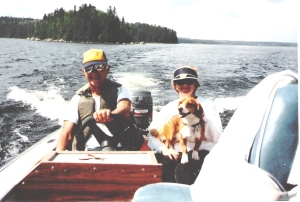 cook fresh fish six different ways at the drop of a hat. She had many other hobbies and interests. She loved the time she and my father spent together in Canada.

While my mother was mostly a caring, loving woman when I was younger, she also had a temper that could become ugly, particularly when I or one of my brothers got out of line. When she would react with rage at some transgression, I sometimes wondered whether it was really me she was angry with, or something or someone else.  Maybe her lack of control over me mirrored a lack of control over her life. I never learned the truth about that. Because I was a particularly rebellious young woman, I bore the brunt of a lot of  my mom’s temper in my teens. Later, when my son Ken was a newborn, I saw an entirely different side – a nurturing and happy woman caring for my little boy without the slightest hint of anger or discontent. She was a wonderful Grandma.

It was in the late 1990’s when she was diagnosed with a rare type of abdominal cancer, Pseudomyxoma Peritonei. The doctors in Wisconsin gave her six months to live. I asked the doctor to tell me which type of this rare cancer my mother had (there were three types) and she refused to answer, simply insisting that my

mother’s life expectancy was six months or less. We did not want to accept this determination, so I located a specialist in Washington DC. We flew there for a second opinion. Shortly afterward my mother had a complicated, long surgery for the cancer.  She did extremely well and returned home much earlier than expected. She chose to fight, and she fought hard. She proved the Wisconsin doctors wrong, surviving over 15 years.

Not quite two years after the surgery, we noticed the forgetfulness. Questions being repeated. Stories being retold. Losing track of what she had been doing. At first it was just annoying. We didn’t know what was going on, and it simply irritated us to answer questions over and over. Eventually, we became concerned.

Her first trip to the doctor for testing revealed mild cognitive impairment. It was enough for us to get involved in memory care treatment. I still recall the initial meeting with the  doctor, asking what kind of dementia this was. Her surprising response was “it doesn’t really matter, we treat them all the same way.”

Mom and Dad continued on in their home, living independently for the next several years. I kept in touch with phone calls, church on Sunday, stopping for lunch or dinner, and holidays. The questions kept being repeated. Mom stopped driving on her own. More and more handwritten notes, lists and reminders appeared around the house. Important letters and bills had the words “SAVE” written in Mom’s handwriting, sometimes circled. Cooking became more difficult for Mom. One time, she put dish soap in the soup she was making, and became extremely humiliated and upset.  Eventually, we stopped having holidays at my parents’ house and started having them at my house.

On Thanksgiving, 2007, Mom and Dad came to my house for the holiday dinner. The next day, my father called asking me to take him to the emergency room. After seeing the doctor, it became clear he needed care for a bladder condition, and would need to stay at my house for the weekend, so I could monitor him. We returned home and picked up Mom, and they came to my house. I settled them in my bedroom for the weekend. They never left.

My father had been spending so much time attending my mother, that he had neglected his own care. His treatable bladder condition had progressed to a point where it needed surgery that was only minimally helpful and ultimately, the cancer became fatal. In the course of evaluating my father, as they stayed at my house it became very clear that my mother’s dementia was progressed much farther than we realized. When we were only seeing her for a day, or talking on the phone, she was able to pull the wool over our eyes, albeit unintentionally. Because of her high level of intelligence, she was able to carry on a conversation for quite awhile (the repeated questions aside)  and it was only when I compared her stories about her day with what I knew to be reality because she was living with me, that I realized she was relaying a life of fiction to us which she made up as she went along.

Thus began our lives as caregivers for my mom and briefly, for my dad. During the course of their illnesses, my three brothers and I took part in caring for my parents. My oldest brother Richard moved from his home in New Mexico to stay in my house with my parents while my dad was dying, because I had a full time job. My brothers Bob and Brad provided respite care and did other tasks to make our situation workable. 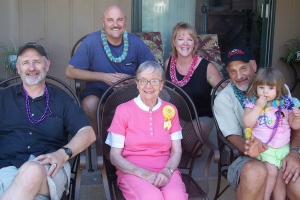 My parents were married for 61 years when my father died of cancer in June, 2008. At his funeral, my mother asked me, “Now, whose husband is that in the casket?”  At the gravesite, when the military honor guard handed her the flag, she seemed to understand it was her dear Russell.

After my father’s death began the quest to find high quality care for my mother. That, and the stories of our adventures and misadventures while Mom  lived with me and in the three care facilities she experienced, are best saved for other posts. Throughout the course of her disease, we saw both the sweet and challenging, angry sides of my mother as she had always been.

My mother’s dementia continued to deteriorate. By 2012, she no longer knew my brothers or I. We were simply nice people who came to visit.  By 2014, she needed skilled care and we were fortunate to get her into Lasata Care Center in Cedarburg.

At some point in the later stages of the disease, we started referring to “the Mom we knew.” The Mom we knew would never have wanted this, we would say. Somehow, we now had a new mom. This was the dementia mom. The dementia mom was not our “real” mom.  I called her “Velma” because she no longer responded to “Mom.” We convinced ourselves that our “real” mom, the Mom we knew, was gone. This somehow made it ok that the “dementia mom” did not know us.  It made it ok that  “dementia mom” swore at her caregivers, and chewed on napkins thinking they were food or stole stuffed animals and pictures of someone else’s loved ones from other residents’ rooms. Our “real mom” never would have done those 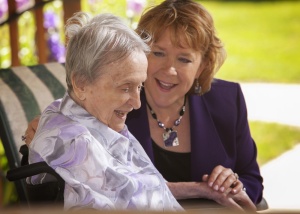 Then came the call, at 5:30 a.m. on Thursday, Jan. 15.  “Your mother has had a change of condition,” said the nursing supervisor.  This call was the beginning of the final stage of my mother’s disease. She had developed a high fever. It subsided after treatment, then came back the next day. My brothers Brad and Bob came down the following day, and then on a Sunday my mother lapsed into a state of not eating, not drinking, not responding.  During the week that followed, we stayed with my mother as much as possible, taking shifts. In those days, on my shifts I held my mother’s hand, rubbed her arms and feet, and played music.  I put cold cloths on her head and put moist sponges in her mouth.  I tried to sing to her and talk to her. I decided I should remind her about heaven, in case she had forgot. I cried and cried for the years we had lost. And in those hours and days, it occurred to me. This was my real Mom. This Mom lying on her bed, dying but still fighting. The dementia mom and the political mom, the Mom who didn’t know us and the Mom who raised us, the Mom who fought with her caregivers and the Mom who beat our behinds, the Mom who repeated questions and the Mom who wrote our papers, the Mom who was there when I was a little girl and the Mom who was there at the end when I felt so very, very old and tired. The Mom who beat cancer, but could not beat Alzheimer’s. The Mom who lived, and the Mom who died on January 24, 2015 after a fifteen year battle with Alzheimer’s Dementia.

I so dearly miss the Mom I knew. Bless you, Mom.

I am an Elder Law Attorney practicing in Wisconsin. I am the owner of Wessels & Liebau LLC in Mequon, WI. I handle Medicaid, Long Term Care planning, special needs trusts, guardianship, advance directives, elder abuse and other related issues for elderly and disabled clients and their families. My Mother Velma lived with Alzheimer's for fifteen years until she died on Jan. 24, 2015, which has given me a personal perspective on elder law issues as well.
View all posts by Carol J. Wessels →
This entry was posted in Elder Law and tagged Alzheimer's, dementia. Bookmark the permalink.
Loading Comments...
%d bloggers like this: